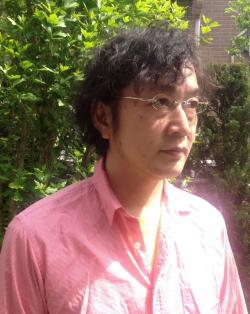 AnimeFest is excited to announce Director Kazuhiro Furuhashi as a Guest of Honor at AnimeFest 2014.

Mr. Furuhashi moved to Tokyo (partly in search of finding colleagues with similar interests) and enrolled for 2 years in Tokyo Designer Gakuin College (TDG). Simultaneously and together with other volunteers, Mr. Furuhashi participated in an independent anime film production for a different trade school. The work was called Locke the Superman and Mr. Furuhashi oversaw the inbetween animation.

After graduating, he first joined an Animation finishing company, Kino-production, in their newly established inbetweening animation department. (There were only 2 people in this group the first year!) Having worked for 3 years on inbetween animation, Mr. Furuhashi left soon after gaining key animation experience to become a freelancer.

Continuing with key animation, Mr. Furuhashi held a seat at Studio Deen, and worked on numerous TV series, such as Urusei Yatsura, Maison Ikkoku , and F. He began episode directing starting with episode 5 of the TV series Ranma 1/2. Near the final stages of the Ranma 1/2 television series, Mr. Furuhashi made directorial debut with the Ranma 1/2 OVA.

Since then Mr. Furuhashi has contributed in various ways to so many amazing works of Anime it is not practical to list them all here. You can check out a more complete list of works at his page here and here.

Mr. Furuhashi thoroughly enjoys meeting fans and attending conventions! We are thrilled to have him join us at AnimeFest 2014 and hope you are too!