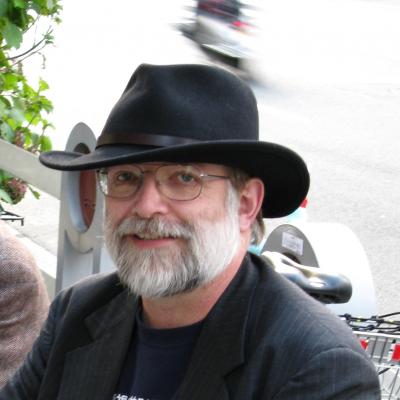 Gilles is best known to anime fans for his three books; The Anime Companion, Anime Essentials and the Anime Companion 2, he has also written for NewType USA and Otaku USA. Gilles also sat on the senior board of Mechademia, an annual scholarly anthology of essays on anime, manga and fan culture.

Gilles also has done presentations on anime for various Japan - US friendship groups, for public libraries, at the Asian Art Museum in San Francisco, at conventions, all day workshops for librarians, introduced anime films at the Smithsonian, and even taught a course for eight weeks on the subject for Pixar staff.

He first discovered anime while walking through San Francisco's Japantown in 1977. As a fan of foreign films he was instantly attracted by the use of cinematic effects in ways that he had never seen in animation before. This began an interest in anime that continues to grow after all of these years.

He has two Masters degrees, one in Library Science from the University of California at Berkeley and one in Theology from Pacific School of Religion also in Berkeley.

His background in theology has proven beneficial in that it gave him the scholarly skills to look at anime and manga with a disciplined eye. This has enabled him to employ anime and manga as a window into Japanese culture.

Quote:
One important thing I learned studying religion is that one should never assume that something from another culture means what it would in ones own culture. Humanity is far too diverse and interesting for that to be the case.