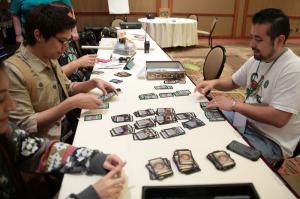 If all you can think of when you hear ‘board game’, is Monopoly or Scrabble, then you really need to pay a visit to our Board Gaming (BG) room. We have a collection of over 300 of the best games ever made. All of our games can be checked out for play. Our gaming staff prides itself on knowing how to play almost everything in our collection and would be happy to help pick or understand a game.

We are also going to have a Play to Win table this year. Play each game and earn one raffle ticket, which enters you into a drawing to possible win one of the games. The following is the list of games at the table this year


You can only earn 1 raffle ticket per game with a maximum of 10 tickets per person. The drawing will be held on Sunday at 10pm. Must be present to win. Only one prize per person. If you win and your name is drawn again, you will have the option of turning in your first prize for the new prize. 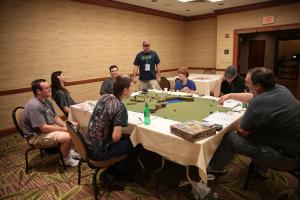 Joining us again this year is the BattleTech Miniatures games.

Title: Battletech Boot Camp
"So recruit, you think computer simulation and classroom training has you prepared for the rigors of live mech combat....we'll find out at 1300 when you and your lance mates square off against recruits from company Bravo" This scenario is geared for the new or returning battletech players. You only need bring yourself and a mech crashing, cockpit smashing attitude, we'll provide the rest.

Title:ATTACK OF TITANS
A massive shipment of brand new Free World League mechs has been hijacked. The hideout of these brigands was found and broadcast across the net by N unknown informant. Many groups of mechwarriors have come seeking to recover these mechs. Upon arrival, the mechs are completely buried with the exception of cockpit hatch. The players will roll from a list of preselected mechs and should they not escape with their loot can attempt to steal an additional mech. Why would someone steal and then bury all these mechs? Have they been tampered with? Where are the people that stole the mechs?

Title:Po-Ke-MECH…Gotta kill’em all, gotta kill’em all
Yes, in a world where “Angry Birds” gets it’s own movie, this was inevitable…Be afraid, be very afraid!

Title: We are totally screwed
The forces of Darkling Inc. have gotten trapped at the dust off spot after the successful destruction of the pirate base. They find the remaining pirates are not happy with them and are all descending on their location. It is a fight for survival

Title: The Unwanted
Two companies of 3025 mechs meet in battle. How will you fare against the mechs that no one wanted.

Werewolves of the Dark Arts

Held every night starting on Wednesday

Werewolf (the genre) is a social game ideally played by large groups of people. It is originally based on a game known as Mafia. In this game, the Villagers must discover the identity of the Werewolves before they are all killed. Every night, the Werewolves form a hunting pack to kill a single unlucky victim. When the sun rises, the hysterical Villagers pick someone to lynch. During the daytime phase of the game, the Werewolves pretend to be Villagers, or can even pretend to be the Seer, the one special Villager who can identify the Werewolves at night. Players are allowed to and encouraged to bluff, lie, and misdirect in order to win the game.

This is a custom version that includes a wide range of special roles beyond just the Seer. There are over 30 different roles to pick from. The suggested minimum number of players is 10, including the Town Mayor (GM), but it can go up to 30 people in one game.

We have a large collection of board games available to checkout from our collection. We will have many gaming tables available for scheduled and pickup games. Simply turn in your AF badge to checkout a game, play it with your friends and return it to get your badge back.